What to do when the Revel's gone: SciPort's iMax Theater has undersea movie narrated by Depp & Winslet 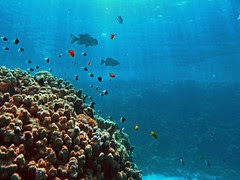 Viewers without snorkels might be a bit shaky as they dive beneath the ocean to seek its most slippery creatures. The 70-millimeter movie is narrated by a glistening Johnny Depp and dripping Kate Winslet.