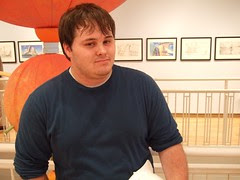 Chris Lyon
Originally uploaded by trudeau
Several of Shreveport-Bossier City’s most talented local filmmakers will compete in the nationwide Insomnia 24 Hour Film Festival this Sat, Oct 13. The filmmakers are required to write, shoot and edit a film within the 24-hour timeline, says Chris Lyon.

Due to the nature of the festival, the filmmakers cannot write the script until the contest begins. This means that a cast cannot be chosen until that day. The filmmakers are looking for talent who would like to be included on a standby list for Sat, Oct 13. Once the script is written, the filmmakers will chose a cast based on the look of each character that they wish to be portrayed as well as the actor's credentials.

Actors and actresses that wish to be a part of this film festival should submit their résumés and head shots to Perennial Media by emailing insomnia@perennialmedia.com.