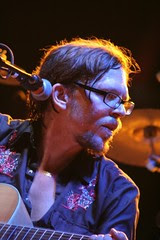 Dirtfoot_0524
Originally uploaded by I Am Jones Designs
Matt Hazelton, road vapor still enveloping his head after the Dirtfoot drive from Texas, said, "We made it. We were voted into Voodoo Fest."

This is some of the best news ever.