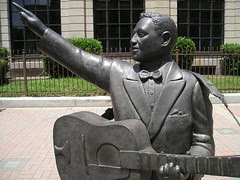 Leadbelly statue: Jessie Pitts, sculptor
Originally uploaded by trudeau
Monty Brown, the folksinger and filmmaker, got his master's degree in history at Northwestern State University, Natchitoches. There he fell under the spell of the yet-to-be-researched material on North Louisiana's folk singers. He says, "I did a Master's thesis at NSU on Leadbelly. I also spent many hours interviewing Jesse Thomas and others when I did the Louisiana Folk Music program. So we've been sorting through the information and decided to log it onto the web."

The result is a Lead Belly-based blog that reflects a broader view of this region' s folk musicians. Brown adds, "I have a whole studio album of music, as yet unreleased, on Jesse and Peaches, which may be their only recordings. We did it at Nightwing Studios back in the day and hope to release a CD before too long."

The blog is called Mister Huddie. There's an additional link to Monty and Marsha Brown's work on this blog's sidebar.
Posted by Robert E Trudeau at 4:26 AM

At our seek you can reveal sundry medication and of course such lay Discount Cialis Pharmacy Online one – Cheap Generic Viagra pharmacy.

When you position Viagra or some other meds in our research you may be sure Best Discount Viagra Pharmacy On-line that this spin-off simply of best standing bequeath be delivered to you certainly in time.