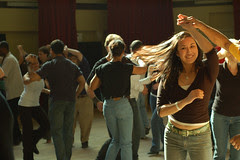 There will also be Spanish Speaking Survival Lessons, Ofrenda Storytelling, and Mexican Ghost Stories. "And," adds Summers, "best of all - the Holy Guacamole Truck and Roaming Display will be on site featuring giant 3D avacados and tastings of guacamole - this is much like the beloved Oscar Weiner Mobile but better!"

We found an article at smallbiz.com that says, "Fresherized Foods—a Forth Worth, Texas, company that packages and distributes Wholly Guacamole, a line of various guacamole flavors to retail stores across the US — recently embarked on a year-long mobile marketing blitz. The big idea, says Jay Alley, is to ease customers' concerns that the dip is fattening and "gooey."

Knowing that the company needed to preach guacamole’s benefits while also offering people a taste, Alley decided to take the show on the road and retained the services of marketing-consulting firm Latimark of Irving, Texas. They hitched a giant avocado to a truck wrapped in yellow vinyl (and adorned with campaign slogans like "Friends Don't Let Friends Double Dip") and have been giving away T-shirts and free samples to crowds in cities from Dallas to New York."