Lead Belly, A Life in Pictures, coming in Nov, 07: edited by Tiny Robinson and John Reynolds, it needs a few more photos from Shreveport 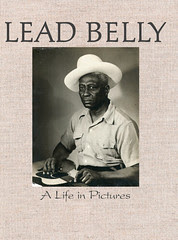 Lead Belly, A Life in Pictures: Robinson, Reynolds
Originally uploaded by trudeau
Lead Belly: A Life in Pictures is a trove of rare, unpublished photographs, news clippings, concert programs, personal correspondence (including letters from Woody Guthrie), record albums, awards and other memorabilia retrieved recently from a basement trunk in New York, says the German publishing company Steidl. It will be published in November.


Lead Belly, born Huddie Ledbetter on a Mooringsport farm in 1888, won international fame as an interpreter of African-American folk songs and blues, adds Steidl. For 15 years he performed folk songs, spirituals, blues and ballads to enthusiastic audiences at night clubs, political rallies, universities, concert halls and private parties. In 1988 Lead Belly was inducted into the Rock & Roll Hall of Fame

Says co-editor John Reynolds from NYC, "I'm going back to
Germany next Wed. to oversee final editing. There are still some photos for which we are looking. Do you have any photos of Lead Belly's new monument where both headstone and front flat stone can be read? We could also use a photo of the dedication -- I saw
one from a local paper with a woman with a flowery church lady hat standing to the left. Want something evocative of the deep south. Also, do you have any pics of celebrities at gravesite? And maybe one of the old Shiloh Baptist Church before it was enlarged?"

If you can help with photos or threads that might lead to photos, please email me at trudeau@earthlink.net (as above) or Reynolds, a Lead Belly scholar and photographer of Huddie in NYC, at mistareynolds@earthlink.net.

Tiny Robinson, co-editor, is a niece of Lead's who was part of his life in NYC. She is founder of the Lead Belly Foundation.
Posted by Robert E Trudeau at 4:35 PM