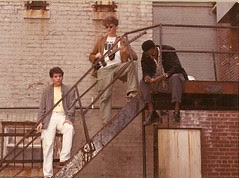 Giblin and General Manager Kermit Poling began the operation last week with a sign of the times program: the first Cyber Fund Drive. "The total amount pledged, as of the close of CyberDay, October 5, was $8,515."

At redriverradio.org listeners can hit a button called Pledge Now to make a digital contribution. You can also see what's new in the realm of digital radio and link to rich public radio resources.

That's host Adam Giblin above, center. He and guitarist Kevan Smith and drummer Brady Blade had a band called Mom's Friend in 1985, says Smith. Thanks to a friend named Tiffany, adds Smith, for finding this archival gem.
Posted by Robert E Trudeau at 6:43 PM