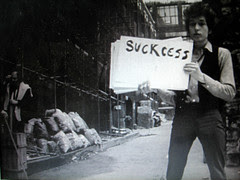 SUCKCESS
Originally uploaded by blue socks
Michael Parker, bookmaven, continues work on the Kerouac reading scheduled for Sat, November 3, at minicine. The reading has been titled "Dharma Bums, Angelheaded Hipsters and Black Mountaineers," and is scheduled for 7:00 at 846 Texas St. in downtown Shreveport, says Parker.

He's found plenty of participants but little ethnic texture amongst the readers and writers. So Parker begs, "If you know folks who would like to participate, particularly more women and non-white folks, I would love to see more Shreveport diversity represented."

Reach the organizer at mpbookfreak@hotmail.com.

How to increase your site page rank - have 10 easy steps…