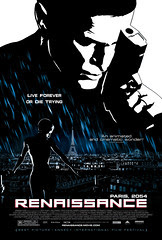 Renaissance
Originally uploaded by las Erinias
Centenary Film Society presents First Friday Cafe Videodrome, says Leo Kacenjar, who adds, "This is a great opportunity to see cult, extreme and otherwise eclectic cinema of the world. Screenings are the first Friday of every month."

All screenings start at 9 P.M. in Carlyle Auditorium.
Admission is free, and the films are open to the public.

This Friday . . .
Renaissance (2006) a French animated feature length. The film is epic science fiction animated in sterile black and white, a dark, intense vision of the future.

A blurb . . .
"A melancholy actioner that shines a new light on film noir. A sort of "The Third Man" for the 21st century, chiaroscuro curio's level of graphic invention is exceeded only by its pleasingly mournful approach. " -Lisa Nesselson, Variety
Posted by Robert E Trudeau at 3:27 PM