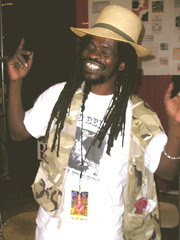 Ron Hardy
Originally uploaded by trudeau
"The Louisiana G-funk Family performs at 12 noon on the Radio Group Stage at the Red River Revel in Shreveport, Sat, Oct 6," says Ron Hardy. "This show will have a special emphasis on Southern Black Culture; catch us live and direct, And don't forget that George Clinton and the P-Funk will perform later that evening."

If Clinton's team wasn't shopping for clothes on Texas St they'd be on stage with Hardy at noon.

Trudeau's assiduous arbitenditure finds favor in the following acts on the final day of Revel 32: