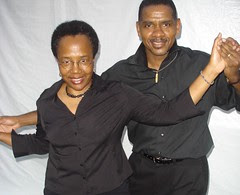 Tarama and Jerry Davenport, Shreveport
Originally uploaded by trudeau
Tarama Davenport writes about Dancing with the Stars, " Last night Jerry & I did a preview performance on the Eldorado Stage at the Revel for the upcoming show, Dancing with the Stars of Shreveport. We've taught swing dance to participants in the show. Other dance instructors have taught them Tap, Jazz, Cha Cha, Samba, Disco & Hip-Hop." Jerry Davenport says,"We're looking forward to a grand and fun night of dance!"

Dance participants from local media, business and community fame will swing it at the Strand Sat night, beginning at 6 pm. It's called Dancing with the Stars of Shreveport and is sponsored by the Christian Dance Center.

Two of the comely faces from Channel 12's anchor roster are featured on the program's web site, dancingwiththestarsofshreveport.com". Featured in special dance number will be Shannon Royster. The host will be Najahe Hall.