Review: Vince, Brown and Williams find chemistry and comedy in the urbane drama Burn This; see it Oct 13, 14 at 8 pm, LSUS Theater, Shreveport 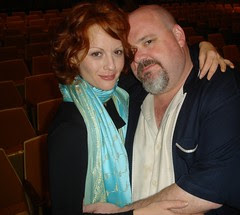 Megan Brown, Taylor Pruitt Vince, Shreveport
Originally uploaded by trudeau
Pruitt Taylor Vince plays a burned-out restaurant manager from Jersey who lurches into the life of an East Village choreographer in the play Burn This. Directed by Robert Alford at LSUS, the production will play on Sun, Oct 7, as well as next Sat and Sun, Oct 13 and 14.

Vince commanded the stage Saturday night by canny movement. Timing, gestures and body English were his tools as much as sonorous voice. He careened between bully and sweet guy - with charisma. He was menacing. He was also ludicrous.

Happily, the audience for the Saturday night performance at LSUS Theater recognized the humor inherent in the pretentious lives of sophisticated New Yorkers. Partly because it is soupy with cliches, Burn This, written in 1987, seemed more of a comedy than a tragedy.

The girl, a chronic coquette played by the sexy Megan Brown, already has a boyfriend. And a quasi-boyfriend. And comfort in the largely gay creative community of the Village. Suddenly none of them seem as stimulating as the chimerical guy from Jersey, despite their money - the boyfriend, played by Gordon Christy - and talent - the roommate / soul mate played by Ryan Williams.

Williams, a first-rate local actor-director, was as capable in evoking laughter and sympathy as the better-known Vince and Brown.

Vince has returned to Louisiana in the midst of a successful Hollywood career. Brown's movie credits include Mr Brooks and the upcoming Brad Pitt movie The Curious Case of Benjamin Button as well as National Lampoon's Robodoc.

At 2 hours and 45 minutes length, the production felt like a real-time drama. But the seduction scene which ends act 1 was so appealing - initially improbable, therefore a marvel - that we found the stamina to see the denouement.

As much as the play, viewers will enjoy watching movie people seeking their actor's passion in stage work. On a misbegotten stage in the hinterlands (Williams observed that the opening night audience was as stiff as a cadaver) Vince and Brown seemed to be having fun exploring their chemistry.

Be aware of the play's stream of New York language and the marvelous ways in which Brown displays her physical charms.