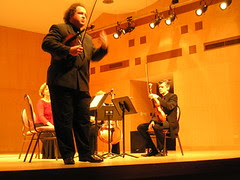 Kermit Poling intros the Premier Quartet
Originally uploaded by trudeau
Red River Radio Network concluded its 12-day fall fundraiser by meeting - and exceeding - a goal of $200,000. The final tally was $201,265.

“With an annual budget that exceeds $1,000,000, it was vital that we raise at least $200,000 during this drive and thanks to our loyal listeners who pledged their financial support, we exceeded that goal,” said general manager Kermit Poling.

Almost 450 new members pledged for the first time, while just over 1, 150 listener-members renewed their financial support. A final-day tally of over $41,500 was the second largest amount pledged in a single day in the network’s 23-year history.

Red River Radio’s listener-members provide the largest source of the network’s income, about sixty percent. Other sources include business underwriters, foundations and grants, the Corporation for Public Broadcasting and other lesser sources.

The Red River Radio Network provides news, information and entertainment to a large geographical area, broadcasting as KDAQ at 89.9 FM in Shreveport, KLSA at 90.7 FM in Alexandria, KLDN at 88.9 FM in Lufkin, KBSA at 90.9 FM in El Dorado, and on the Lincoln Parish translator at Grambling State University at 90.7 FM.

www.redriverradio.org
Posted by Robert E Trudeau at 12:49 AM