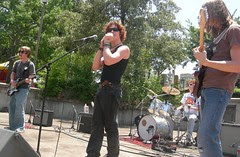 The Noids are classic teenage, off-hand rockers. They're also off-kilter and they're artists. Lead singer Paul Garner is a gifted creator of posters and paintings. Guitarist-singer Hayden Camp is a keeper of the flame of Leadbelly tunes. Both have a love affair with the absurd.

Posted by Robert E Trudeau at 2:32 AM