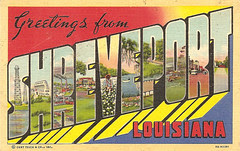 Chris Brown is a young keeper of the flame of Shreveport musical stories. He recently aired an inteview with record producer Stan Lewis on his Tuesday, 8-10 pm, KSCL show. On Tues, Dec 19, he says, he's got an overview of the sound of Shreveland. "It's time for my annual two hour radio show devoted to Shreveport musical history. This time we begin in 1923 and end up in 1981. I'll give you a few sneak peaks: Leon's Lone Star Cowboys, Rev. Utah Smith, Margaret Lewis, The Road Runners, and The Wedgeheads -- all locals -- will be among those featured. Hope you tune in!"

Brown adds, "KSCL recently jumped from 150 watts to 3500 watts. It only took ten years. I’m very excited this finally happened. Amazing that people living 20 miles away can now hear us. Before, listeners had to be within 2 miles."
Posted by Robert E Trudeau at 1:10 PM