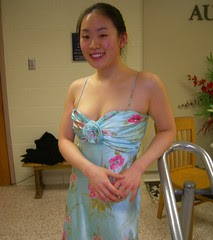 Imagine world-class performers from Korea (9 of them), China ((7), Europe (5), Israel, Canada, New Zealand, Japan, Costa Rica, and SE Asia (2) as well as the US (11) gathered at Centenary College to perform on grand piano. Boggles the Shreveportitis. The event is the little-heralded, annual Wideman Piano Competition.

Does the Wideman offer a business model for Shreveport? It reminds me of a small version of Jackson, Mississippi's US International Ballet Competition, which is held every 4 years. There's a small relationship to Spoleto, Festival USA, held in Charleston, SC. The point is that an international gathering of high quality performers - young and photogenic, I might add - is a marketable shot of entertainment.

There's been an increase in the number and level of hunger in young concert pianists in recent years, says Lester Senter Wilson, Wideman director. Shreveport audiences have benefitted.

Might the Wideman position itself as a regional draw? Fill a few hotel rooms and spawn additional parties and folderol? Is there someone with another take on the international, classical music competition idea? Hot global oboists in the spring?

Seems to me there's an opportunity for Shrevetown. The lobby of Hurley Music Building was swimming in Asians and Europeans during the Wideman. It was intoxicating. The audience for the finals was terrific, almost filling the Anderson Auditorium.

Yet there was room for thought.


The Times has more on the Wideman from writer Jane Bokun. And SptFaces has more photos.