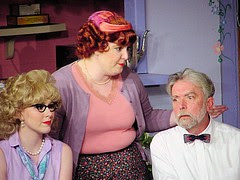 Seeing Stars in Dixie is a comedy about small-town people scrambling for a spot in a movie. Yes, it was chosen specifically for this region during the Hollywood South period, director Dick King told the Times.

On the casting couch are journeyman players of the regional stage. Eugen Crook plays across from his wife, Sylvia Rachal. Betty Baker and Reagan Cassanova are veterans on the East Bank boards. Charity Schubert is a bold actress that we enjoyed in several productions when she was a student actress at Centenary College.

Posted by Robert E Trudeau at 4:36 AM