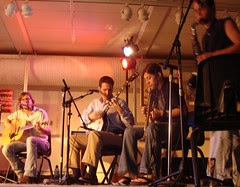 "Our new CD will be available for those who missed the CD release," reminds Eric Gardner on Dirtfoot's myspace page. To the band's elation, a case of the Cd's were sold at the Noble Savage release party, said Gerardy.

Gerardy was under the impression that the Municipal concert was sponsored by the Independence Bowl. It is actually a Star Productions & Entertainment Services, Bill Carrier, event.

Gerardy added, "We're in awe when we get to play on the historic stage of the Municipal." It was the site of the Louisiana Hayride.

Posted by Robert E Trudeau at 7:21 AM