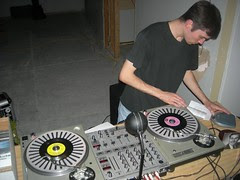 "We have hip-hop, rock, soul, electronica, and experimental music in our rotation," says Lacey Anderson, recent student director of KSCL, 91.3. "Our dj's are away for the semester break, so we're mostly automated for the moment. For a sample of what we normally play on the radio, you can check out the KSCL Top 30 on the website."

This past month, says Chris Brown, historian and DJ, "KSCL jumped from 150 watts to 3500 watts! It only took ten years. I’m very excited this finally happened. Amazing that people living 20 miles away can now hear us. Before, listeners had to be within 2 miles."

Not all the DJ's are away. Some of them are community people who simply love having a radio fortress from which to fire their trebuchets, like Brown and Kevan Smith. Smith's Friday night show, 6 to 8 pm, is called Rock Fight. He says, "Are you enjoying the boosted signal? I know I am. It's a great feeling to get in the car and drive around everywhere and there's still something good on the radio."

Both aficonados keep blogs where you can view the play lists.

"Rock Fight!" he adds, "endeavors to play the best in punk, indie and new wave from the past four decades -- the 70s through the 00s. You can hear the evolution of "underground" rock and appreciate how the old connects with the new. For example, today's great band Bloc Party played next to the edgy post-punk Gang of Four is a nice illustration of how "everything old is new again." And it R o c k s !"

The name Rock Fight!? "It comes from the song of the same name in Cheech and Chong's movie "Up In Smoke." The line "A new wave is on the rise / With safety pins stuck in their eyes" was particularly inspirational."
Posted by Robert E Trudeau at 8:32 AM

I am very much enjoying being able to hear KSCL even when I cross the river. And Kevan's show is one of my faves.

Merry Christmas (or Happy Festivus) to you, Trudeau!

You flatter me, Doughnutjane. :) Gracias.

I have a nice show planned for this Friday.