12th Night, also known as Feast of the Epiphany, is beginning of Carnival season in New Orleans - and Shreveport 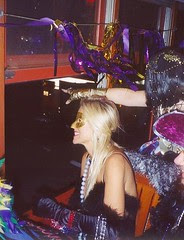 Costuming and dancing begins on January 6th in New Orleans, says atneworleans.com. It's known as Twelfth Night, or the Feast of the Epiphany, or "little Christmas."

In the Crescent City the Carnival parties begin with the ball of the krewe known as The Twelfth Night Revellers, and with the Streetcar Ride (party) of the equally historic krewe of the Phunny Phorty Phellows.

Carnival revelers begin to serve the King Cake on Twelfth Night. The recipient of the slice containing the baby (or bean, or coin) is expected to provide the cake for the following day. The cake tradition can be traced to the Middle Ages, says Nola Live.

In Tudor England, says answers.com, the Twelfth Night marked the end of a winter festival that started on All Hallows Eve. A King or Lord of Misrule would be appointed to run the Christmas festivities, and the Twelfth Night was the end of his period of rule. The common theme was that the normal order of things was reversed.

This Lord of Misrule tradition can be traced back to pre-Christian European festivals such as the Celtic festival of Samhain and the Ancient Roman festival of Saturnalia.

Shakespeare's play Twelfth Night, or What You Will was written to be performed as a Twelfth Night entertainment and first performed at Middle Temple Hall, London, 1602. The play has many elements that fit Louisiana's carnival tradition, such as Viola dressing as a man, and a servant, Malvolio, imagining himself a nobleman.

The Feast of the Epiphany is a Christian celebration noting the manifestation of the divine nature of Jesus to the Gentiles as represented by the Magi.

Among the celebrations to be held by the mostly non-Catholic but revel-hungry North Louisianians is a lunch at Brother's Seafood at which the Blanc et Noir Marching Society will gather.

Those interested in joining the krewe are welcome to join the 1 pm, Dutch treat, lunch. Respond, please, via trudeau@earthlink.net.

Posted by Robert E Trudeau at 6:09 AM

Will be archiving N. La. Carnival 2007 activities at
http://blancetnoirmarchingsociety.blogspot.com/