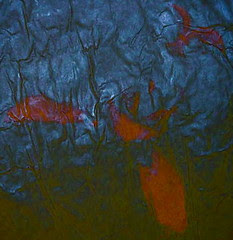 "Ooh, I remember an At-the-Loft art opening in the late 1970's that featured my body prints," said Shreveport painter Nevelyn Brown. "I painted myself orange and printed my body on large sheets of brown paper."

"I didn't get to paint myself and make figure prints in the 60's when everyone was doing it," she said. Brown was an art student in San Antonio.

In 1974 she and her husband, an Air Force colonel, were in Shreveport. Brown rented the last open space in At-the-Loft. She remembered with a giggle, "My husband said I could do anything I wanted as long as I didn't embarass him or get in the newspaper. Well, the body print opening became a big event. It made the newspaper. It was celebrated as one of the events of the year."

Painters Jerry Wray, Flo Duval, Clyde Connell, Jean Sartor and Lucille Reed were among the artists who had studios in At-the-Loft in the 60's and 70's. They were determined female artists at a time when art was dominatd by men. And they were serious students of abstract art. "Some of this region's first abstract art was created there," said Brown. "And the realistic painters mocked them, I was told by Lucille Reed."

Clyde Connell became recognized internationally for work done at 708 Cotton St. "She worked on her hieroglyphic series there," remembers Brown. "Mostly she did works on paper there. Also, she made her papier mache skin there."

Painter Berk Borne had a studio and recalls that "There was no air conditioning. And we only had space heaters for the cold. In winter I'd bundle up like I was going skiing just to go paint."

Sculptor-painter Luclle Reed painted her five-color grid canvasses there. She made totems and "I remember her weaving," says Borne. She wove in wool, paper and wood, among her media.

"Tama Nathan had a printing press there," says Borne. "She made books and all manner of art."

Lewis Conger, who inherited the Shreveport Laboratories building, was given credit by Brown as, "Quite a patron of the arts for preserving it." Conger said, "Rent was practically nothing. It was so low that it made, in the end, an economical stoarge facility. But it was vacated because access was by a long and difficult flight of stairs and, basically, there was no parking." Conger held out on the demolition that was carried out this week, he said, "Hoping that they might find a benefactor. No one came along."

At-the-Loft, called "Shreveport's oldest continually operating studio work space and alternative gallery," is a central site for art history in Shreveport. Indeed, as Diane DuFilho is working on a book featuring the pioneering female abstract painters above, it is a story that resonates widely.

My plan is to collect stories and images for a blog site devoted to At-the-Loft. Photographers Phil Messinger and Neil Johnson have sent photos.

Painter Lewis Kalmbach sent this note from San Francisco: "The Loft has only a few memories for me, but they are fond. Laura Noland Harter had a studio up there when I was president of Artist Transit at the old Central Station. When I visited Laura there, I was so envious because it was so clean and organized! The artists there were so serious about their work and inspired me to keep painting. I was most impressed by the older artists and thought to myself. 'Artists never really retire. I hope to be an old man artist one day.'"

Please send your images and notes to trudeau@earthlink.

Posted by Robert E Trudeau at 9:51 AM