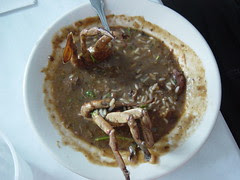 There are two reasons why locals are lamenting the closing of Pete Harris Cafe. The first is history. The restaurant's lineage goes back to the 1920's (see the Times sidebar).

More importantly, this was the one place in Shreveport where Black and White came together on Black turf. Politicians, journalists, artists: we met there because it sent a message, which was that the Black side of Shreveport was important.

In its incarnation as Freeman & Harris Cafe it was a center for African-American life. When I was a musical columnist and feature writer for UpState Weekly I often went to Freeman's to find respondents. Going to meet people in Allendale was a cultural adventure. Freeman's was a place where a white liberal always seemed welcome.

The plain decor was always a surprise to me. The renowned center of soul food - the eatery that served BB King and Bobby Blue Bland, among many famous visitors - had walls as plain as a Christian's kitchen. Of course, the image was in the clientele. African-Americans in Freeman's somehow always seemed nicely dressed. There always seemed to be a couple of tables featuring white folks.

During the era of dancing til the starry hours at the Florentine Club the last stop was often Freeman's. It was open late and it was urban. No one batted an eyelash when dancing fools in stylized clothing tripped into the dining room.

Then there was the palate. Stuffed shrimps were too obvious for me though I have listened to a thousand people talk about them. I loved the gumbo. Used to have it delivered to me when I worked downtown. The reason I chose this illustration from flickr is that Freeman & Harris gumbo always had a lot of crab body in it. It had a magical mix of oil, pepper, chicken bones and seafood debris.

Maybe one implicit message in the closing of Pete Harris Cafe is that racism in Shreveport has shifted. Yes, I know this is hairy conjecture and flies far above factual footing. But my feeling goes like this: once racism here was quiet but pervasive. It called out for self-conscious offsets like scheduled pilgrimages to eat soul food on the old side of town.

Has some of that consciousness of race and place lessened?

At any rate, as a former waiter - for Joe Fertitta - and restaurant reviewer - the Shreveport Journal, among others - I routinely ascribe restaurant closings to faulty management. It is a competitive and consuming business. To survive you've got to be in it for 1000%.

Maybe the name Pete Harris Cafe or Freeman & Harris will return. Not easily, though.

Posted by Robert E Trudeau at 5:48 AM