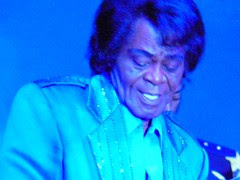 Born in poverty in Barnwell, S.C., in 1933, James Brown was abandoned as a 4-year-old to the care of relatives and friends. He grew up on the streets of Augusta, Ga., in an ''ill-repute area,'' as he once called it. There he learned to wheel and deal, wrote a reporter for the AP.

''I wanted to be somebody,'' Brown said.

Mr. Brown, the Hardest Working Man in Show Business, Godfather of Soul, America's Most Famous Felon and Soul Brother Number One, died early Monday, his agent said. He was 73.

Brown was hospitalized with pneumonia at Emory Crawford Long Hospital on Sunday and died around 1:45 a.m. Monday, said his agent.

Posted by Robert E Trudeau at 1:43 AM

Thanks for hitting it. - D

If you have stories of JB and Shreveport, please post, or send them to trudeau@earthlink.net.
Or leave a message at 318-861-6809