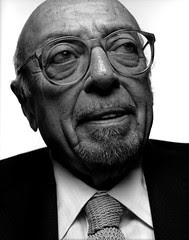 Bruce Flett writes in his Bluebirds newsletter, "Last Thursday we lost arguably the most important person that brought Blues, Jazz, R&B and Rock n Roll to the World Stage. Ahmet Ertegun, founder of Atlantic Records, died from serious head injuries he received from a fall at a Rolling Stones concert October 29. He never came out of a coma. At 83, he was still rockin' with the Stones. As Buddy Flett said, "What a cool way to go".

Every musician that ever worked with Ertegun loved him. Some of the long list includes Aretha Franklin, Led Zeppelin, Quincy Jones and Ray Charles.

For those of you who saw the movie "Ray" [which we hope is all of you receiving this!] , Ertegun is prominently portrayed as the man who brought the World to Ray Charles. Not so much as a business deal, but as a true fan of Ray's talents. Ertegun was close with every artist he signed, and remained close even if they left Atlantic Records.

Stan"the Record Man" Lewis of Shreveport was friends with Ahmet Ertegun and his genius producer Jerry Wexler, as far back as the early 1950s. "We used to hang out together in the lobby of the hotel at Record Conventions back in the old days, along with Sam Phillips, Leonard Chess, the Bihari Brothers, and the Motown bunch. I would also visit him at his offices in New York 2-3 times a year. Ahmet was just a magnate of everthing that happened at Atlantic".

Jerry Wexler, now 90, called Stan Lewis a week ago to tell him the news that Ahmet was not going to make it more than a few days.

Bill Wax of XM Satellite Radio, probably the most important blues dj in the World today, e-mailed us with this comment on Ahment Ertegun: "Dear Bruce- Yes, I have been following the news of Ahmet over the past few weeks. You are absolutely right - he was a Visionary of modern Popular music. There will not be another like him or his brother. Ahmet grew up around the D.C. area and I knew a man who owned the record store that Ahmet would hang out in when he was a kid."

Posted by Robert E Trudeau at 4:46 AM