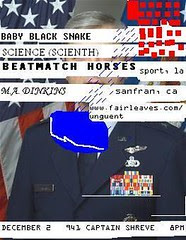 At brainwashed.com I found a Duncan Edwards review of one of the area's most elusive but hard-working multi-media artists, Matt Dinkins. The last time I talked to Dinkins by phone was a couple of years ago and he was excited to have found a Buddhist monastery in, like, Bossier Parish (if you go out there and crassly disturb their peace I will burn in hell for an extra 20 years).

His plans at that time were to go to Thailand, yet he surfaced in San Francisco. Whether on Texas St or Telegraph Ave, there is evidence that Dinkins is driven to experiment with lights and soundscapes.

From the Edwards review of Dinkins' release, Guitar Realtime Processing: "Dinkins, a former resident of Shreveport, also records as Unguent. The history of music in Shreveport gives no clues to the sound of this record, however. Leadbelly favored the twelve-string, and was from Shreveport and although new evidence suggest they might be from Slidell, The Residents still claim Shreveport as their site of origin, before—like Dinkins—a relocation to California. On a map of sound, the location of Guitar Realtime Processing is closer to the least tuneful aspects of Budd & Partridge's Through The Hill. While these sketches lack the austere depth of such contemplative works as Nils Okland's Bris, it's similarly a record in which to get lost, and American Routes be damned."

Bubbling up from the underground house circuit locally has been evidence that Dinkins is back or visiting. All I know about this weekend is in this poster, forwarded to me by David Nelson.

Posted by Robert E Trudeau at 9:39 AM