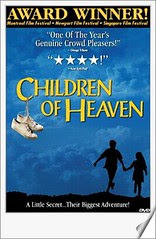 children of heaven
Originally uploaded by gopeter.
Carlile Auditorium of Mickle Hall on Centenary College’s campus is the usual site of the Centenary Film Society showings, says professor Jefferson Hendricks. The society is in its 23rd year of bringing international, independent and particular Hollywood movies to the Shreveport-Bossier area.

Films on this season’s schedule include:

All films:
* 7 p.m. in Carlile Auditorium, Mickle Hall, Centenary campus.
* free and open to the public.
* co-sponsored by The Robinson Film Center.
* www.centenary.edu/life/film
* 318-869-5254 or lkacenja@centenary.edu or jhendric@centenary.edu .
Posted by Robert E Trudeau at 7:55 PM