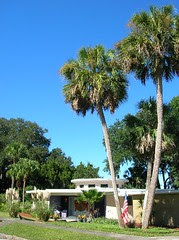 Artist Drew Hunter was gothic before gothic was mass market. A gifted illustrator and designer, he once entertained Shreveporters with Halloween installations, costumes, logos, films and soundtracks.

Formerly a resident of Dallas, Hunter recently wrote, "I am in Florida now -- Jacksonville to be exact. I’m the Design Director for Sally Corporation. We specialize in audio animatronic figures and dark ride attractions for amusement and theme parks worldwide. Look us up if you get a whim – www.sallycorp.com.

I live in a unique home here – a vintage “Atomic Age” round house titled “Geodesica."

It was built in 1959 and was a sensation (and quite a novelty) of that year's Jacksonville Parade of Homes. It's amazing how many people we've met here who remember that, and who have always wanted to see inside the house. We ought to charge admission!

My partner of almost 25 years, Charles Chapman, and I bought it from the original owners in 2002. It's built like a bunker -- cinder block and stucco outer walls, and a 20 foot diameter rotunda in the center, also built of cinder blocks. It rests on a rise about a block off the St. Johns river in the North Arlington area of Jax.

We have a beautiful panorama view of the river and of a really spectacular bridge which spans it a few miles away. It's an older, very quiet neighborhood, and we love it here. And, hey, in my opinion, you simply can't have too many palm trees!"

The irrepressible Hunter adds, "Here's a bit of Shreveport palm tree trivia. I grew up in the Broadmoor area of town at 4107 Finley Drive. The house -- second off Atlantic, on the east side -- is currently owned by the Broadmoor Baptist Church. There's some truly ironic Cosmic Joker sort of significance to that, but I'm too weirded out about it to figure out what it may be. If you drive by, look to the far right of the house in the front yard -- you'll see what may be the tallest palm tree in town.

I bought that tree in the late '50s from Akins Nursery with my allowance, and planted it. It has survived ice storms, snow storms, tornadic winds and more, and the last I saw it in August '06, it was doing quite nicely, thank you. What a legacy!"

Posted by Robert E Trudeau at 2:21 AM

Dr. Blood's (Mr. Hunter's) haunted houses at the Louisiana State Fair were always fun. We lost something really good when he left.

I was an original cast member of Dr. Blood's first haunted house at the Louisiana State Fair in 1976 (I think). Great memories. Nice to hear Mr. Hunter (aka Dr. Blood) is still alive and kicking...

Always creative, always memorable, always delightful - that's Drew Hunter! While his Dr. Blood put him on the map, his murals for children delighted children and grownups as well! So glad to know Drew is living "outside the box" and still sharing his art with the world.

If anyone would like a catch a glimpes into Drew's wonderful round house go visit the website www.freewebs.com/geodesicafl

Drew is a wildly inventive guy! I played the prime suspect in the inaugural production of his original play, Ripper, and was in a dinner theater production of A Christmas Carol which he directed in Shreveport - way back in 1980. I loved working with Drew! Jacksonville is lucky to have him.

Greetings from beyond the unseen; from past the only imagined; and not too far away from figuring which cantaloupe to buy at the market --- (huh?) ----
I was reading some of these posts and am happy to hear I haven't been forgotten in my dearly beloved ol' stompin' grounds! Chris, yes I rmember that first crazy year of the Dr. Blood State Fair show in '75. I can't believe we actually had guests -- including my mom & dad -- crawling through refrigerator boxes on the floor in the dark! And Tim, yes, the production at the old Barn Dinner Theater (then taken over by some unusually pleasant Christian souls) was -- well, we got through it, didn't we? What a learning experience. I still recall the sweet little lady who originally played Mrs. Cratchet who I replaced one week prior to opening. She wanted me to come over to her place, cook me a steak dinner (!) and show me where the aliens had probed her. Really. I declined the invitation. Anyway, I'm still here in Florida in my wondrous round house. Dr. Blood is "on ice" at present, but he may rise again someday. Meanwhile, I have a new creation I've been having fun with -- Ooozo the Living Dead Clown! OK, so I'll be 60 later this year -- but nobody said I have to grow up! Drew

I have been trying to find you and Chuck. Please email me at:

shadeaux1944@yahoo.com and give me your phone number, etc.

Ashley is getting married March 26th (finally). She's all grown up now, a college graduate, and a night auditor for Marriott Hotels.

Love your house! Hope you and Chuck are doing well. I retired August 6th and have battled cancer four (4) times but I'm doing well at the moment. One day at a time, sweet Lord! That's all I can ask for at this point.