All because it's Carnival time: the essential music of Mardi Gras in Louisiana 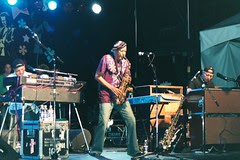 Charles Neville & brothers
Originally uploaded by Kil Patrick.
New Orleans singers and songwriters were monsters in the 1950's and 60's. And their national hits - "Let the Good Times Roll," "All these Things," "Sea Cruise," etc - became perennials in the city. So they're part of the sound of Carnival season.

The regional hits became associated with the season, too: "Iko Iko," "Mardi Gras Mambo," "Ride your Pony." So a Best of New Orleans Rhythm n Blues collection - including things like "Mother-in-Law" and "Ooh pooh pah doo" - is going to set an authentic mood at a Louisiana gathering during Carnival.

One of the deep classics is the album Dr. John's Gumbo (1975): "Junko Partner," "Iko," Lil Liza Jane," "Big Chief." Put on those tunes and you will be seen as a true believer. In fact, just about anything from the hands and vocal cords of Dr. John is going to set the carnival table right.

Before the Neville Bros, there were the founders of funk: the Meters. Their "Cissy Strut," "Looka Py-py," "Fire on the Bayou," "Hey, Pocky way" and "Africa" are indisputable Mardi Gras. A Best of the Meters is a dance starter, too.

The Neville Brothers have recorded the gold standard tunes: "Mardi Gras Mambo," "Meet the Boys on the Battlefront" and "Brother John"(recorded with the Wild Tchoupitoulas Indians) and "Hey, Pocky way" and "Fiyo on the Bayou." In fact, if I were to recommend one Nevilles disk it would be the 1981 Fiyo On the Bayou.

James Booker, the Piano Prince, and Professor Longhair, of "Tipitina," "Go to the Mardi Gras," and "Big Chief," are piano pounders who also have set the sound of the city. Look to Dr. John, too, for elegant piano on the album Dr John Plays Mac Rebennack.

In brass band jazz you can bring on the Preservation Hall Jazz Band and the traditional, or you can go for the pumped up brass sounds of the Dirty Dozen, Rebirth Brass, Hot 8 or the many newcomers. I could not do without the Rebirth's got-to-dance album Feel Like Funkin It Up.

Zydeco is also right for Carnival. Look for disks by the King of Zydeco, Clifton Chenier, as well as Rockin Dopsie and Boozoo Chavis. Buckwheat Zydeco and Nathan & the Zydeco Cha-chas are also highly-approved. This week I bought an album from Chubby Carriere at his show at SciPort and it is hot.

There are two moods from which to choose in Cajun sounds. The traditional and light tunes come from people such as the Balfa Brothers, Jimmy C Newman, Steve Riley and the Mamou Playboys, DL Menard and Jo-El Sonnier. The bass-heavy new Cajun is also there: try Roddie Romero, Zachary Richard or Beausoleil. On the top of the 2006 lists was the Savoy-Doucet Cajun band.

Locally, I like Tubbs Hardware & Cajun Gifts for a concise rack of CD's that will deliver much of what I've recommended. Online, there is an unusually fine boxed set that I have, thanks to my friends Nan & Clyde Massey: Doctors, Professors, Kings & Queens. Its 4 disks sample all the above.

Regardless of where you get it, the music of Mardi Gras remains a legacy for Louisianians. To me, these records are like the Beatles. It's global heritage. Put on the music and allons danser, cher ("Let's dance, friend").
Posted by Robert E Trudeau at 8:01 AM

What about Clarence "Frogman" Henry? Find his Frogman Blues on youtube.com under his name search and enjoy the real New Orleans! I LOVE your blog!!