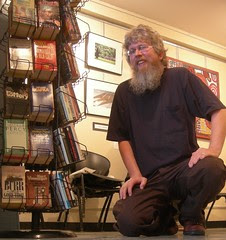 Michael Parker's Books in the West Edge Gallery
Originally uploaded by trudeau.
Book maven Michael Parker says by way of a bio, "I bring six years of experience working for Powell's in Portland, the largest independent bookstore in the world, including five years as a used book buyer. I'm a native of this area, but have also lived as an adult in Lafayette and Baton Rouge, Vermont, New Hampshire, northern California and seven years in Portland before returning about 2 1/2 years ago."

"Some of the more unique items include," says Parker,
"Signed and numbered copies of Gore Vidal's Empire and Hollywood, in nice slipcases; Signed copy of T. Harry Williams' definitive bio of Huey Long, Signed memoir by former Secretary of State Dean Acheson, Paperback of Spit in the Ocean #7, devoted to the work and memory of Ken Kesey and signed by several contributors, including filmmaker Gus Van Sant (Drugstore Cowboy, My Own Private Idaho, Good Will Hunting), Rare mass market edition of The Earl of Louisiana by A.J. Liebling, Mass market copy of Vote!, book-length endorsement of George McGovern in the 1972 presidential election, written by Yippie co-founders Abbie Hoffman, Jerry Rubin and Ed Sanders."

I've never seen him naked, but I can say Michael is a really nice guy and has some great books beside what is mentioned here. Book freaks rule!

He steals most of them from friends' houses. Don't ever turn your back. He puts them down his pants whether he steals them or not. Maybe getting him to pose nude is the only way to get them back.