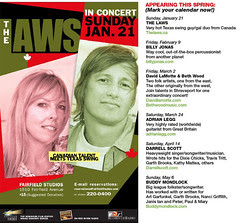 They cite musical influences like Steve Earle, Guy Clark Buddy & Julie Miller and Willie Nelson. Currently, they have been taken under the wing of producer Mark Bright, noted for his work with Rascal Flatts and Carrie Underwood. John plays guitar, mandolin and harmonica; Michele plays bass & guitar. They're known for their Tight as a Glove vocal harmonies."