Terrific cast in A Little Night Music might catch fire if audience takes it as a sex farce; performances at Strand Theater Jan 5, 6 & 7 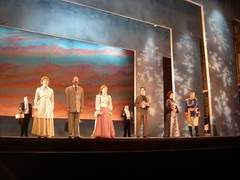 Steven Sondheim and Patric McWilliams have brought a grand evening of song and costume to the Strand Theater with the River City Repertory's rendition of A Little Night Music. The stately production has a cast full of pretty women and handsome - even cute - men. They demonstrated tuneful voices. The troupe was light on its feet, too. On opening night, however, the production arrived tantalizingly short of brilliance.

The Thursday night audience sat there as though gazing at a wedding of some of the town's nicest couples from the finest families. Terrific ceremony. But where was the laughter? Maybe it was the audience's sense of care that damped their response and blanketed the cast. And as well-rehearsed and competent as the cast was, no one seemed ready to jump out and milk the audience for giggles.

John Gayle was mesmerizingly consistent and clear of message as the protagonist. Seva May was handsome and fluent onstage; her tone and energy matched Gayle's. And her version of "Send in the clowns" was thoughtfully modulated. It was one of the high points of the lengthy show. First night ran 7:40 to almost 10:30.

Jonathan McVay and Ellen Lindsay, two of the Equity Actors on stage, were yin and yang. Young and impetuous, they seemed appropriately over-the-top. Bill Gallmann played Gayle's principal antagonist with vast competence and was closest to letting the audience know to lighten up. But he pulled in the reigns on his comic horse. In Act Two the lusty maid, played with sparkling eyes and confident voice by Heather Bryson, jazzed the show with "The Miller's Son." But the missing twinkle was brought to the stage on opening night by the knowing smiles of Jim Montgomery, who seemed to relish his less-than-leading role.

McWilliams certainly is effective at filling the stage with a visual banquet. The costumes, designed by McWilliams, were sumptuous and modestly sexy. The McWilliams set was shrewdly minimal and enhanced by the adept lighting of Mike Riggs.

In the orchestra pit were 23 first-chair orchestra players from the Shreveport Symphony Orchestra. Their full-bodied accompaniment was velvety. Happily, the singers' wireless mics were smartly managed.

McWilliams has delivered an elegant show. The cast is so competent in their singing and so well-disciplined in their dramaturgy that an entertaining evening can be guaranteed. And somehow I think that the weekend audiences may be better than we were at giving the cast a fair return on their energy.

Pardon me this prescription, but I hope you attend A Little Night Music knowing that Sondheim is risque (John Gayle strips in Act One and it worked) and fun as well as thoughtful. His tunes are not burlesque, but the play is largely a sex farce. The dialogue is a bit dense at times, but don't be inhibited by the serious bits. There's bawdiness galore.

Both cast and audience might be reminded. Don't be afraid of the sex in A Little Night Music.

The show was fabulous! KUDOS to McWilliams and to all those involved with RCRT. The Shreveport community will benefit greatly from this organization. Best of luck to the troupe...I cannot wait to see the next show!