Hot movies ahead of schedule: For Your Consideration at Regal Cinema on Th, Feb 8, 7:00 pm; Robinson Film Center event 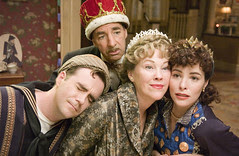 for your consideration
Originally uploaded by machu picchu.
Robinson Film Center's Chris Jay says, "We are screening Christopher Guest’s new film, For Your Consideration, at 7 pm, Th, Feb 8, at the Louisiana Boardwalk Regal Cinemas. Christopher Guest is best-known for his mock-rock n’ roll documentary This is Spinal Tap, and in this new film, he does to Hollywood what Spinal Tap did to the music industry.

The first film in our One Night Only series, Half Nelson, screened in November to an audience of about 120. We have plans to host six to eight of these screenings during 2007, as a way to cultivate audiences for indie film prior to the opening of The Robinson Film Center in downtown Shreveport.

Admission to each film is $7.50, and will be collected outside of the theater on the evening of the screening."
Posted by Robert E Trudeau at 7:50 AM