Bang the Drum, Feel the beat: Michael Butterman with the Drumline from the Grambling State Marching Band and the Shreveport Symphony Sat, Jan 27, 3 pm 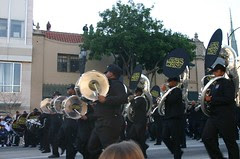 grambling & star wars
Originally uploaded by jonathankylebowden.
America liked the way Leonard Bernstein spoke the language of music to youngsters. Bernstein was a Chinese dragon, floating in like fog, roaring when necessary to protect the emperor. Shreveport now has its own Bernstein. His name is Michael Butterman.

Having watched Shreveport Symphony Orchestra music director Michael Butterman communicate with orchestra audiences numerous times I can assure you that he has a silver tongue. And his programming ideas have unfolded to lovely effect - bringing the Marcus Roberts jazz trio to the Shreveport stage, among several.

On Sat, Jan 27, regional audiences watch him take another leap. He's dreamed up an interactive percussion concert that features the symphony plus, says the PR, the Grambling State University World Famed Tiger Marching Band Drumline. Fresh from an appearance in the Rose Bowl parade, I'd like to add.

Bang the Drum, Feel the Beat brings to mind the percussion show Stomp. As seen at the Strand the colorful show Stomp was exciting at first but lost its edge through the relentless pounding. The SSO drum show has the potential to draw on the personalities of the Grambling players as well as the SSO players. And it will hinge upon the erudite but supple voice of the city's still-new and charged-up orchestra conductor, Michael Butterman.