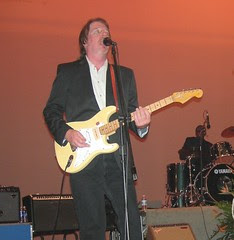 Buddy Flett
Originally uploaded by trudeau.
The Bluebirds’ Buddy Flett is coming out with an album of acoustic blues next month, to be called Mississippi Sea. "We recorded the acoustic guitars so they are real, real big," said the happy Flett. The producer is musician Steve Howell, of Howell & Caskey.

He added, "the DVD/CD “10 Days Out: Blues on the Backroads” starring Kenny Wayne Shepherd & Double Trouble and featuring B B King, Gatemouth Brown, Bluebirds’ Buddy Flett, Hubert Sumlin and other blues stars will be released this week. Buddy and Kenny were filmed playing acoustic guitars at Lead Belly’s grave near Mooringsport, Louisiana, performing “Blues in a Honky Tonk Key” from the Bluebirds’ Swamp Stomp CD. "Ten Days Out" will be aired on PBS tv and available from Warner Bros. Recordings. More info at www.tendaysout.net.

Next Fri, Feb 2, Flett will open for songster Jesse Winchester at LSUS Theater, says Baton Rouge producer Johnny Palazotto. Tickets are $20 and available at the door for the 7:30 pm show. Click on the acoustic blues / Mississippi Sea hyperlink above for a downhome Flett video.
Posted by Robert E Trudeau at 6:58 PM

I saw Buddy Flett's performance with Kenny Wayne Shepherd, Bryan Lee and the legendary Hubert Sumlin at NAMM ... It was brilliant! Can't wait for Flett's CD and to catch the 10 Days Out CD/DVD too from KWS... Very cool!