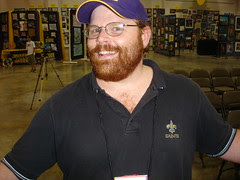 Set in 1840's St. Petersburg, Mo., Tom Sawyer matches wits with his stern Aunt Polly and bratty half-brother Sid, falls in love with the feisty Becky Thatcher and goes on the adventure of a lifetime with Becky and that irresistible renegade, Huckleberry Finn, while trying to fend off the villainous Injun Joe.

Filled with foot-stomping, toe-tapping songs by Don Schlitz ("The Gambler"), and a warm, funny book by Ken Ludwig ("Lend Me A Tenor"), The Adventures Of Tom Sawyer is a tale of thrilling escapes, comedy and inspiration for the whole family.

Peter Pan Players is online with a PPP blog and their own Myspace.
Posted by Robert E Trudeau at 6:46 AM