Picnic Pops by the symphony under Michael Butterman at Riverview Park on Sat, May 17, 7:30 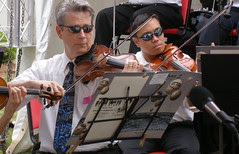 Gary Bruns, Daniel Santelices
Originally uploaded by trudeau
Picnic pops weekend: Michael Butterman will lead the Shreveport Symphony Orchestra in a concert at Riverview Park on Sat, May 17. The music will boom, purr and roar.

Butterman's baton will slash the air at 7:30 pm. The SSO will be joined by the ArkLaTex Youth Symphony under the direction of Chris Allen.
No charge.

See photos of the Youth Symphony rehearsal at ShreveportFaces, please.

The photo above is of the SSO playing under the banner of Opus, the new player's association, in a pops show presented at La Boardwalk. Opus represents the musicians reaching out to the public and trying to build enough support to, ultimately, save the core players and the SSO itself.

Those who want to contribute to the orchestra's decimated financial base may contribute to the annual fund atthe SSO. And, because of the nature of extended negotiations, it is possible that OPUS is building a fund. OPUS has a new Audience Association, too.

Thanks to Susan Rogers for photo and background.
Posted by Robert E Trudeau at 5:28 AM