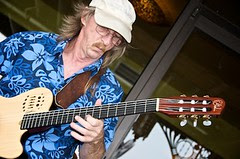 Pat McCann, Austin, the Oasis / Jeff Rohling
Originally uploaded by trudeau
"Twas quite a surprise," says Pat McCann of his recent solo performance for the rehearsal supper of the Jenna Bush wedding. All McCann knew going to The Range, a restaurant in Salado, Tx, where he plays regularly, was that the job was for someone from Virginia who had listened to his CD and liked his music.

An additional surprise when the groom's mother came up to McCann as he played. She said, "T-turn it up."

McCann won fans growing up in Shreveport by being a hot guitarist in rock bands such as the Warlocks, Gripping Force (you should see the photos) and Axis. In the early 70's he joined forces with Roger Barnes, George Hancock and several additional players in the quintet Heart's Island. They had a large fan base, a singular jazz/blues style, and went to California to record and experience oneness.

McCann made music in Jazziana and Rue du Lac before moving to Austin. Today he plays in Stop the Truck and the Mau Mau Chaplains in addition to his solo work.

Gear, you ask? Well, a Godin nylon-string electric through a Fishman amp. Electrically he's playing a Strat as well as a JR Beck slim hollowbody through a Fender Super Champ XD.

McCann plays it all, from jazz to country to RnB, but lately, he says, "I'm possessed by Django." If you can find a copy of his solo CD, "50 Years in De Nile," you'll love it.

To know Pat and is music is to Love Pat and his music, love you Pat!CayD.

I believe I saw Gripping Force play at the auditorium in Byrd around 67. So where are the photos?

Didn't the win a "battle of the bands" promotion, sponsored by the phone co, & change their name to "the Yellow Pages"?

The Gripping Force won a "battle of the bands" on the ABC television program "Happening '68" that was hosted by Paul Revere and Mark Lindsay of Paul Revere and the Raiders.

Several years ago, I wrote a "What ever happened to...?" letter on the Shreveport Times website and was contacted by a young reporter there. She found a member who still lived in the area and wrote a nice article. Alas, some editor, probably not from the area and seeing no relevance, axed it being published. I still have it in an e-mail somewhere as the reporter shared it with me when she realized it wouldn't be published.