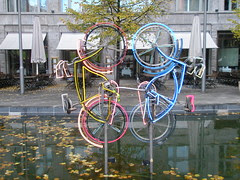 Robert Rauschenberg 1998 'Riding Bikes', Berlin
Originally uploaded by hanneorla
Rauschenberg was one of my heroes. His playful art coupled whimsy with heart.

"There is no reason not to consider the world as one gigantic painting," Rauschenberg said. At MoMA one reads, "He composed First Landing Jump out of a rusted license plate, an enamel light reflector, a tire impaled by a street barrier, a man's shirt, a blue lightbulb in a can, and a black tarpaulin, as well as paint and canvas. Jasper Johns coined the term "Combine" for such works, which he described as "painting playing the game of sculpture."

In 1983 he came to my generation's attention by his design for a Talking Heads record. With Speaking in Tongues, David Byrne and partners created a great set of songs, including "Burning down the house" and "This must be the place." The design by Rauschenberg was not impressive. But that a pop art master worked with the Heads was very cool.

The Rauschenberg edition of Speaking in Tongues is still in my cabinet; thus I own a Rauschenberg. My daughter Madeline made family history by taking off the plastic wrap of a record - argh - which had been put aside as a collector's item.

In designing activities for students visiting the artspace exhibit Faces of Katrina, I employed a Rauschenberg collage technique. In fact, the hundreds of students and teachers who visited the exhibit were given the option of making what was called called a "Rauschenberg Collage." They were based on his Overseas Cultural Exchange works.

When Kathryn Usher makes cool assemblages based on detritus from the streets of Highland, she is doing Rauschenberg from the 1950's. When you sit down at your piano to play the John Cage piece, 4' 33", you are doing a piece inspired by Rauschenberg's White paintings. "The "white paintings" produced by Rauschenberg at Black Mountain in 1951, while they contain no images at all, are said to be so exceptionally blank and reflective that their surfaces respond and change in sympathy with the ambient conditions in which they are shown," says wikipedia.org.
Posted by Robert E Trudeau at 1:59 AM