Review: Bridget Winder leads a voice-rich Sound of Music for the Academy of Children's Theater production at Marjorie Lyons Playhouse, Shreveport; performances May 3, 4 and May 8 - 11 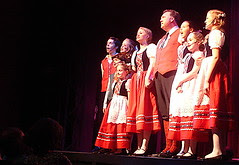 Cynthia Whitaker, director, and Lauren Ross, choreographer, have drawn remarkably melodious performances from a cast of 50, nearly all of them youngsters.

Bridget Winder plays Maria with aplomb. Her smile and capable voice, her graceful movement and appealing profile allow the audience no doubt that a young star is coming into her own on the Marjorie Lyons Playhouse stage.

Ella Watkins, as the teen girl in the Von Trapp family, is also impressive in voice and grace. She, too, has a light-up-the-stage vibe.

Academy of Children's Theater has become a cultural incubator in these several seasons. Drawing talent from across the region, Whitaker and Ross have established a high standard for talent, energy and detail. Example: you'll hear an additional song in the stage version of Sound of Music than are in the movie.

Sound of Music is not an easy sell in this material world. As handsome as is the cast, the songs are classics of heart-tugging melody and harmony; they do not rock. The costumes (Nora Moon, Cynthia Whitaker) are rich of design and fabric; they are also demure. The production ran from 7 to 9:35 on Friday night; that's a bit long for the modern world.

But there's a 10-piece orchestra below the stage, not a CD. And the lighting (Courtney Gaston) and sound (Adam Boyd, Ed Taunton) are unusually effective. Casting is first-rate. Even the cast of nuns have big, beautiful eyes to match their well-trained voices.

It's a huge cast but it has depth: Jenny Taunton and adept comedian Tyler Northen add zest to the second half. Holt Kirkrndoll, the young Nazi, was terribly smooth in both dance and song. Mike Martindale is a very capable captain.

This show is a vocal feast that meets the highest standards in children's theater. Do not hesitate to spend an evening with this Von Trapp family.