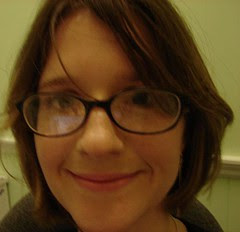 Kathryn Hobgood, New Orleans
Originally uploaded by trudeau
"I am almost done with all coursework at Tulane for an MA in musicology. Entering the pure research phase," writes Kathryn Hobgood. Only a couple of years ago Kathryn, aka Katy, was singing her songs in local venues and writing articles on local musicians for SB and other publications.

"I have been researching, for about a year and a half now, a great uncle who was an obscure jazz guitarist named Snoozer Quinn.
Lucky for me, my research is turning toward the Shreveport leg of his
career, 1924-1933, and I hope to come home for an extended period to do some archival research.

Have you ever heard of Snoozer? He played with Paul Whiteman briefly in 1928-1929, and he was at the Washington-Youree hotel with Peck Kelly and other bands in the early 1920s. The Shreveport Musician's Union Hall has a beautiful photo of Snoozer Quinn and Louis Armstrong standing together in Princess Park (c. 1931)."

Hobgood is working with Cass Acosta of the Musician's Union
and writers John Andrew Prime and Eric Brock, as well as others.

If you've got something on Snoozer Quinn or local music in the 20's and 30's, please email her at hobgood.kathryn@gmail.com.
Posted by Robert E Trudeau at 5:54 AM

It will be awesome to have Ms. Hobgood back in town. It was our loss when she headed south.