Download freely: 10 tracks from the slip, by Trent Reznor, available at nin.com 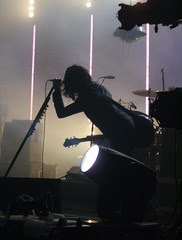 “Thank you for your continued and loyal support over the years - this one's on me,” Reznor wrote on the Web site shortly after midnight as he made the music available. He encouraged downloaders to share and remix tracks.

A CD and vinyl version of the album will be made available in July.

“The Slip” represents the fifth set of new material Reznor has released this year. In March, he released a four-volume set of instrumental music, “Ghosts I-IV,” through his Web site, at five different prices, including a free download of some of the tracks. After a week, he reported more than 700,000 orders and downloads, and revenue of $1.6 million.

Says Peter Kirn at createdigitalmusic.com, "NIN has used a Creative Commons attribution / non-commercial / share alike license, so you can remix their track for non-commercial purposes, free."
Posted by Robert E Trudeau at 7:10 PM