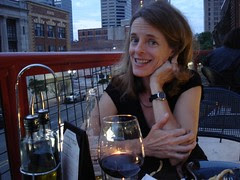 Talbot, Robinson Film Center, Shreveport
Originally uploaded by trudeau
Chris Jay, the media maitre 'd for the RFC, says, "Our new website is live. It's obviously a Beta version, we're working out lots of kinks, but it's live and it functions."

And, on another topic, Jay adds, "The last few weeks have been really educational for me, as a film programmer. One of the more painful lessons I have learned is that out of every group of movies we bring through at the RFC, there will be one that is a harder sell to Shreveport-Bossier City. Oddly enough, it's usually the film that I feel people really Need to see - for cultural or educational value - more than any other. On Friday, May 23rd, I'm opening a movie that fits this description. It's a documentary about a rock n' roll summer camp for girls ages 8-18, and it's called "Girls Rock!" Basically, the film follows a group of girls as they learn that they don't have to look like Hannah Montana to be able to take a stage and express themselves. Their voice doesn't have to fit in with the images they see and the messages they hear in pop culture. The film is also a treat for indie music lovers, featuring songs and appearances by Le Tigre, Sleater-Kinney, and Bikini Kill, among others. It's a fantastic little film that I hope people will give a chance. Here's the info:

"Girls Rock!" The Movie
at The Robinson Film Center
May 23-June 8
Rated PG for language
http://www.girlsrockmovie.com
Posted by Robert E Trudeau at 12:22 PM

Err, obviously I meant to say that the girls in GIRLS ROCK! learn that they don't have to look like hannah Montana to take a stage and express themselves. Whoops. My description of the movie here, obviously, the result of sleep deprivation.