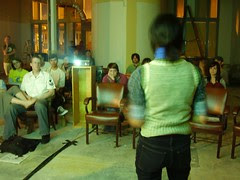 “Quantum Leaps,” a touring experimental film exhibition curated by Astria Suparak, visited David Nelson’s minicine? venue Tuesday night, presenting a showcase of recent works from filmmakers who color outside of the lines, off of the page, and into a different universe. Suparak, who has curated shows involving the likes of Miranda July and Cat Power for venues like Brooklyn’s P.S.1 Contemporary Art Center, introduced “Quantum Leaps” as an attempt to explore definitions of sex.

But films like “Nugglies” (a flash animation involving flying neon pianos, something like what would happen if Lisa Frank designed an Aphex Twin video) and “Yoga Deathmatch” (Jim Munroe’s machinima meditation on the karmic cycle as represented by first-person shooter video games) seemed like good, clean fun. If there was a unifying theme of sex, it was lost on me, as my eyes took the wheel while my brain fell asleep in the passenger’s seat.

In fact, the lack of an easily-identified, neatly-packaged theme is exactly what I love about minicine? The first image that appeared on the screen following Astria’s introduction was a flash-animated, disembodied owl’s head that duplicated itself several times and spun off into a .JPEG of space. It’s that kind of party at minicine?, and that’s why I go. For the duration of these screenings, the viewer is allowed to stop trying to make sense of what s/he is experiencing, because there’s often no sense to be made.

Not all of the pieces included in “Quantum Leap” are small, fun morsels of insanity. There were more reflective, thought-provoking pieces in the showcase as well. These include Caroline Koebel’s “I Want to Have Your Baby,” a very intimate series of confessions of love, and Seth Price’s funny/poignant “Folk Music & Documentary,” during which a counter culture stereotype simply repeats to the camera the words that are shouted at him by someone off-camera. The flying neon hot dogs of “Taco Monde” were fun, but these two films made “Quantum Leaps” memorable.

You can view still frames from “Quantum Leaps” at:
http://www.astriasuparak.com/quantumleaps.htm

“Yoga Deathmatch” can (and should) be viewed at:
http://www.yogadeathmatch.com

Chris Jay is a writer, a filmmaker, and a hip-hop artist living and loving in Shreveport, Louisiana.
Posted by Robert E Trudeau at 5:52 PM