A new point of view re the shotgun houses of Allendale: an artists' community 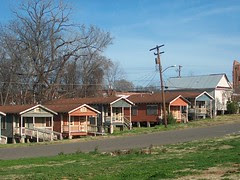 Abandoned, vacant houses beckon to visionaria like musician-producer Ron Hardy. "Those houses have been empty for 2 to 3 years. People who want to play and create a new community - this is a place to do it."

If you like the idea of gathering your hearty creative gang in a block-busting arena, say hello to Hardy at Artspace, Fri, Mar 10, 6 to 9 pm. It's a cd release party for Hardy's R N B / hip hop album and a new rap cd from a Shreveporter named Rocko.