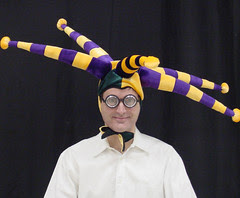 Pat Maxey / The Company / Bossier City, Louisiana
Originally uploaded by trudeau.
“The Compleat Wks of Wllm Shkspr (abridged)” opened March 10 at East Bank Theatre with a three-man cast. The farce compresses all of William Shakespeare’s plays into a manic 90 minutes. Too, there's a 15-minute intermission.

Director Heather Peak Hooper promises "No moments of seriousness. That’s right. Even the tragedies – “Hamlet,” “Othello,” “Romeo and Juliet,” et. al. – get a send-up. In fact, “Hamlet,” gets the second half by itself. The play is, after all, considered Mr. S’s masterpiece."

From the opening use of composer Cole Porter’s “Brush Up Your Shakespeare,” to the conclusion with the three actors playing “Hamlet” backward, the show tries not to miss a comedic trick, says Hooper. And at several points, the audience is brought into the play.