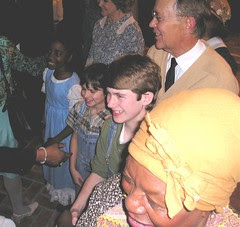 Shaylen Braggs, the phenomenal Haley Evans, Tyler Krieg, Henry Walker & Thelma Harrison
Originally uploaded by trudeau.
Shreveport Little Theater's production of To Kill A Mockingbird is a righteous, emotional piece of work. It's the sins-of-our-fathers night at SLT when a group of doctors, lawyers and students come together on stage to testify about our past.

While it amusing at times to hear actors with Louisiana accents trying valiantly to adopt the Alabama form of drawl, the production is marked by tight direction and cross-cast competency.

I could not help but imagine that a star is being born in the form of Scout Finch, as played by Eden Gardens School 4th grader Haley Evans. She is animated, sensitive to her lines and seemingly unflappable.

From Jim Cowles' caricature of a cracker to Henry Walker's gravid Atticus, the production brings us vivid stereotypes. Also notable are Thelma Harrison as Calpurnia and Tyler Krieg as Jem.

Director Bobby Darrow is leading Shreveport Little Theater into the new century with a successful plan that mixes entertainment and art.

Tickets and schedule for this mostly-sold out show:
shreveportlittletheater.org
424-4439
Posted by Robert E Trudeau at 10:51 AM