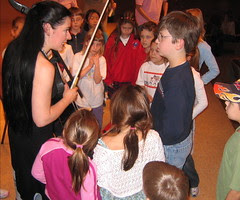 Selections include Rossini’s Overture to The Barber of Seville, Tchaikovsky’s Variations on a Rococo Theme, Mozart’s A Musical Joke, Haydn’s Symphony No. 94 in G Major (“Surprise”), and Grandma’s Aching Back. Grandma’s Aching Back was composed for the evening’s guest cellist, Shauna Rolston. It is based on children’s stories by Heinrich Hoffman of three small ones who misbehave.

Named a "Young Artist to Watch" by Musical America, celebrated cellist Shauna Rolston is considered one of the most compelling musicians of her generation. Described as impressive, fearless, and provocative, Rolston has been captivating audiences - worldwide - with her passion for music since the age of two, says her scintillating web site, shaunarolston.com.

Her CD “This is the Colour of My Dreams”, which features music by contemporary Canadian composers, won Best Classical CD at the 2002 West Coast Music Awards. Her most recent CD, “Shauna and Friends,” features arrangements of popular favorites for solo cello. Her latest video, “A Pairing of Swans,” with prima ballerina Evelyn Hart (directed by Veronica Tennant), was premiered at the 2004 International Moving Pictures Festival, and two of Shauna’s previous videos, “smokin f-holes” with Squeezeplay, and “Words Fail,” with dancer and choreographer Peggy Baker, are featured regularly on BRAVO.

Admission is $5 for students and higher for everyone else.

PARKING: Limited valet parking is available at $3. A free shuttle will depart one time from Uptown Shopping Center at 6:15 p.m. A second free shuttle will depart from the AmSouth Bank parking garage located on the corner of Milam and Market Streets at 5:30 p.m. Both shuttles will continue to make pickups at the AmSouth garage every 10 minutes until concert time.
Posted by Robert E Trudeau at 3:50 PM