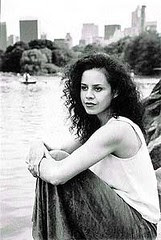 Conductor Dan Gettinger will give a pre-show talk at 6:30, says Jennifer Gallagher. Valet parking is available. A shuttle service is available from the AmSouth garage and the Uptown Shopping Center starting at 5:30. Call (318)227-9503 to purchase tickets.

Gormley is a global opera star and has her first record out. On the album Where Morning Lies she sings spiritual songs from, says her record company, her adopted homeland of America (she's from Oz), including songs by Aaron Copland, Samuel Barber and Ned Rorem as well as Ricky Ian Gordon. Clare also sings traditional African American spirituals made famous in concerts by the likes of Jessye Norman and Kathleen Battle.

The Times says the show will sell out. And City of Shreveport Water Department head Tad O. Joy claims responsibility for recent record-breaking crowds for symphony and opera performances in Shreveport. "We added a diploid enzyme to the filtration system that is called 'Culture Plus' in our industry," he said. "We'd never tried it before," he admitted, "but we got it cheap from the Crescent City when they were shut down. Sadly, we had to ship the remainder of the supply back to the Big Easy last week."