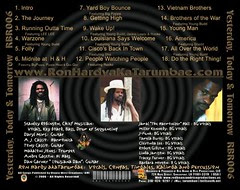 One of the busiest artists in Shreveport, Ron Hardy is a singer, percussionist, songwriter and producer. This week he brings a new album to Artspace for a debut. The cd release party is Fri, Mar 10, from 6 to 9 pm.

Rap and r & b and the spoken voice of Hardy, aka Tarumbae, fill the album. No banging by the outlaws on this one. The bass notes will make your car ring like a New York bell, but you will find a righteous voice atop the steel.

The Ron Hardy sonic team is a highly effective group. Stanley Robinson is chief musician and is responsible for vocals, keyboards, bass drum and sequencing. With these solid tracks Robinson proves himself a local supastar, if a quiet one.

Young Budd rips tracks with smooth rapping and melodic turns, as well. Rocko is a reformed Angola veteran who sings both on this album and on his own new cd, also available Fri at Artspace.

The hottest track on the Hardy cd may be the one sung by the rapper Shedd. It is a politcal critique called simply America.

Hardy's collection is perfect for a party. But because he's a deep musician, there is thought and care in each bouncing track. The cd is called Yesterday, Today and Tomorrow and is a righteous hip hop disk.