Need a shot of grunge with a chaser of pop? Centenary College has Better Than Ezra & The Terms Fr, Ap 21 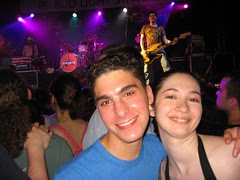 This could be you / this was you.
Originally uploaded by PeterDennisNET.
Centenary College and Fighting Squirrel Productions will sponsor a concert featuring Better Than Ezra and The Terms Friday, April 21, at 7 p.m. in the Centenary Gold Dome, says the college's PR office.

They call Better Than Ezra a grunge-pop band. Founded in New Orleans, the trio migrated to Los Angeles in the early 1990s. Their popularity boomed in 1995 with their bad single, "Good." The latest album, "Before the Robots," was released in 2005.

Opening the show will be Baton Rouge-based band The Terms, who "play in the alternative rock style." Their 2005 album, "Small Town Computer Crash," follows themes of postmodernism, says their creative director.

Fighting Squirrel Productions is a student-led organization at Centenary.